COVID 19 Announcement: How We Are Continuing to Keep You Safe In 2021 – Click Here For More Information. 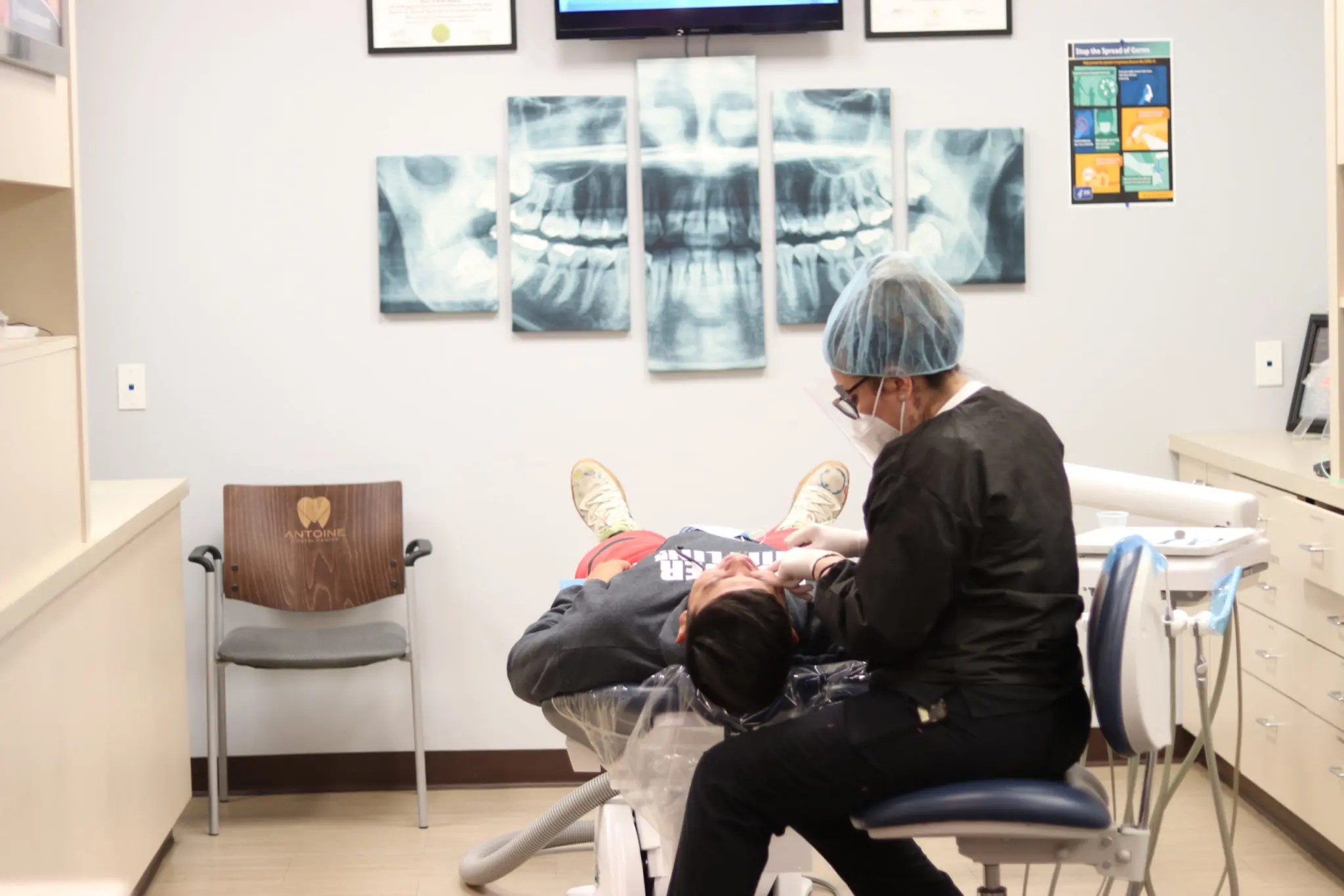 Antoine Dental Center in Houston TX, offers Incognito braces for patients who would like more options for their orthodontic treatment. Incognito braces–also called hidden braces–are a cutting-edge technology in lingual orthodontics developed by industry leader 3M. As its name suggests, Incognito lets patients have their teeth straightened while maintaining maximum treatment invisibility. Unlike more traditional orthodontic treatments, Incognito braces are positioned behind your teeth, makng them nearly invisible from the outside. The patented brackets are not visible when used in the back of the top teeth, and other people are unlikely to see Incognito brackets behind the bottom teeth. Like other lingual braces, this treatment offers a number of major benefits, a standard treatment process, and broad eligibility criteria.

The crowning feature of Incognito is its minimal impact on your appearance. As an alternative to Invisalign, Incognito offers even better discretion for the treatment of top teeth and comes close for the teeth on the bottom. In addition, the structural similarities between Incognito and traditional metal braces mean that this treatment works well for a greater variety of bite irregularities than Invisalign does.

What is the difference between Incognito braces and traditional metal braces?

Who is eligible for Incognito braces technology?

As a form of lingual braces, Incognito offers a wider range of eligible candidates than Invisalign and other types of clear braces do. In fact, most adults, teens, and children are eligible to receive this treatment at Antoine Dental Center. However, candidacy is determined on a case-by-case basis, and some patients may be ineligible for Incognito braces if they have extensive overbite or underbite or if they have very small teeth. This can be determined in the initial consultation appointment.

As with all orthodontic treatments, many patients new to dental-straightening technologies find that there is an adjustment phase. Introducing dental treatment can take some getting used to! The great majority of patients report having adjusted to Incognito braces within two weeks, and comfort only increases as they become more used to the technology. Some patients report increased tongue irritation, given the positioning of Incognito braces. In those cases, our Incognito specialist will work with you to adjust your treatment and mitigate any undesirable effects as needed.

Are Incognito braces hard to take care of?

Much like traditional metal braces, Incognito braces may require certain dietary adjustments. Food that is particularly hard, crunchy, or sticky can be difficult to clean out of braces, including Incognito braces. Keeping up with your recommended oral hygiene routine goes a long way to keeping your Incognito braces clean and your mouth healthy as you work on developing your perfect smile.

How much do Incognito braces cost?

Incognito braces tend to cost slightly more than traditional braces. It’s important to remember that Incognito technology is individually customized to make the braces a perfect fit, which increases the treatment specialization and effort. At Antoine Dental Center, our Incognito braces treatment plans run anywhere from $5,000-$10,000.

Do you offer payment plans for Incognito braces?

Yes, we do. Monthly payments can be as low as $125. We also offer 0% interest rates for those who qualify.

Every dental insurance plan is different. Your plan may cover the full or partial cost of your Incognito braces, or it may not contribute to the payment at all. You should consult with both your dental health team and your insurance provider to determine your exact situation.

The availability of Incognito from our dentist gives area patients one more option for having their teeth straightened discreetly. If Invisalign is not an option for you, it is very likely that Incognito will be. Patients can schedule a consultation with our Houston orthodontist to find out if Incognito meets their needs. Contact us at 713-955-0203 to schedule your appointment today!

What is preventive action?

What is preventive action? Every time you put on a mask, wash your hands after coming home from the grocery store, or choose to socially distance, you are taking preventive action against COVID-19. Taking small steps now means you have a better chance of avoiding the...

END_OF_DOCUMENT_TOKEN_TO_BE_REPLACED

5 ways to help your kids have healthy teeth

The thought of your child contracting a disease probably scares you as a parent. This is because the sound health of your children is the key to your happiness. When it comes to the health of kids, the slightest sickness can turn serious. This is why you must ensure...

END_OF_DOCUMENT_TOKEN_TO_BE_REPLACED

Do I Need My Wisdom Teeth Removed?

What Are Wisdom Teeth? Wisdom teeth or the third morals are the last teeth to come all the way through. They are the last set of morals which grows at the four corners of the mouth. Usually, you get third morals in your teens or early twenties. It is not always...

END_OF_DOCUMENT_TOKEN_TO_BE_REPLACED

Dentures: Everything you need to know

by Antoine Dental Center | Nov 2, 2020 | How To Treat Your Smile? Learn More About Preventive Care.

Everything you need to know about what dentures are and whether they are right for you What are dentures? Dentures are prosthetic teeth that are used to replace either all or some of your missing teeth. Dentures that replace all your teeth are called complete...

END_OF_DOCUMENT_TOKEN_TO_BE_REPLACED

How to find the Best Dentist in Houston

by Antoine Dental Center | Aug 27, 2020 | How To Treat Your Smile? Learn More About Preventive Care.

With so many different dental offices, finding the best dentist in Houston is not always easy. If you want to find a dentist who is good at what they do and who you will feel confident going to, then it's time to look at the internet. We don’t want to toot our own...

END_OF_DOCUMENT_TOKEN_TO_BE_REPLACED

by Antoine Dental Center | Jul 30, 2020 | How To Treat Your Smile? Learn More About Preventive Care.

You probably cringe when you hear the words root canal. Root canals are often associated with pain, illness, and infection. In reality, root canal therapy is often a pain-free and quick procedure. With this being such a common procedure with over 14 million being...

END_OF_DOCUMENT_TOKEN_TO_BE_REPLACED

How to Keep My Gums Healthy

by Antoine Dental Center | Jul 13, 2020 | How To Treat Your Smile? Learn More About Preventive Care.

How do I know if I have healthy or unhealthy gums? Healthy gums are pain-free, firm, and pink. Unhealthy gums, on the other hand, might be red or swollen, or might appear to be receding—that is, pulling away from the teeth. If you notice that your gums bleed when you...

END_OF_DOCUMENT_TOKEN_TO_BE_REPLACED

by Antoine Dental Center | Jul 6, 2020 | How To Treat Your Smile? Learn More About Preventive Care.

Everyone’s teeth are sensitive to some degree; many people refrain from biting into ice cream, for example, because it’s just a little too cold to enjoy eating it that way. Tooth sensitivity exists on a spectrum, however, and it can quickly edge into outright...

END_OF_DOCUMENT_TOKEN_TO_BE_REPLACED

How to achieve the smile of your dreams

by Antoine Dental Center | Jun 7, 2020 | How To Treat Your Smile? Learn More About Preventive Care.

Do you avoid smiling in photographs? Do you feel self-conscious when you open your mouth? Are you disappointed when you catch sight of your teeth in the mirror? If you answered “yes” to any of these questions, you’re not alone. Surveys have found that around 65% of...

END_OF_DOCUMENT_TOKEN_TO_BE_REPLACED

by Antoine Dental Center | Jun 7, 2020 | How To Treat Your Smile? Learn More About Preventive Care.

As you face the various challenges and considerations that have arisen due to COVID-19, we understand that some things may be falling by the wayside. Don’t let your teeth be one of them! In fact, safeguarding your oral health is a critical part of keeping yourself...

Innov8ive Marketing
We Are Open And Ready To See You

There is a new normal after we open. Before arriving to your dental appointment, please complete this patient screening form required by law.

Make sure you also visit this link to learn about the changes we have made to keep you safe. Contact the office if you experience COVID-19 symptoms within 14 days after the dental appointment.